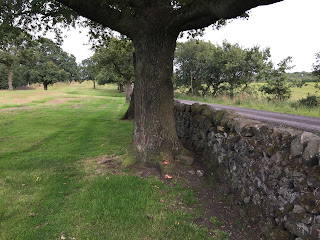 For the last five years, I’ve been trying to arrange a trip to the UK. I finally managed it, and now I’m here. The last time I tried to travel to Britain, I had to cancel because of family matters. That was for a Harry Potter conference in Scotland. Much of the travelling I’ve done recently is like that—taking trips to places, but always to a conference. Travelling to conferences means that you need to attend sessions, and you get less of a chance to see the place you’re visiting.
This time it’s different. I’m travelling with my daughter, and we are hitting as many interesting sites as we can. Because so much of my reading and academic work is tied to this island, my trip feels as much a literary pilgrimage as it does a holiday. We’ve already seen many places in and around Glasgow, but so far my favourite has been visiting the antonine Wall near Falkirk.
The Antonine Wall is a roman Wall built around 142 C.E., which was a way for the romans to try to push their territory into what they called Caledonia. Unlike Hadrian’s Wall, a hundred miles to the south, the Antonine Wall was a turf wall built on a stone foundation. The foundation remains, but little else. You can also find the remains of a roman fort known as rough castle nearby. The romans abandoned the wall after only eight years, withdrawing south to Hadrian’s Wall.
We got spectacularly lost trying to find the wall—missing a sign, and getting sent in circles by the ubiquitous round-abouts, which seem to be the favoured way of moving traffic here. Once we found the site of Rough Castle and the Antonine Wall, we got out of the car and began to wander. There’s a dog park on the other side of the wall, and people were out walking dogs or jogging in the late afternoon.
There I was, my hands on the wall—an ancient foundation, now covered with moss and grasses, built nearly two millennia ago by the romans. We walked farther on to the site of the fort, and I stood on the remains of the rampart, and thought about the romans and their efforts to push their way into this country. Who knows what the peoples of northern Britain thought of these southern invaders. We of course can speculate, and I could feel my imagination running away with the possibilities. I thought of Tolkien as we followed a path lined with large stones leading to the fort, , and standing on the old rampart I thought of the books I’ve read by rosemary Sutcliff—books such as The Eagle of the Ninth, in which Marcus and Esca, his friend and former body slave, journey into the north to discover the fate of the lost Ninth Legion.
The hills, the quiet, and the ancient stones covered in grasses fill me with an emotion I can’t articulate. The place itself inspires the imagination, but I also feel a connection to the landscape and its people through the books I’ve read that were in turn inspired by these same places and their histories. 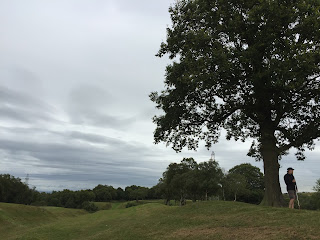