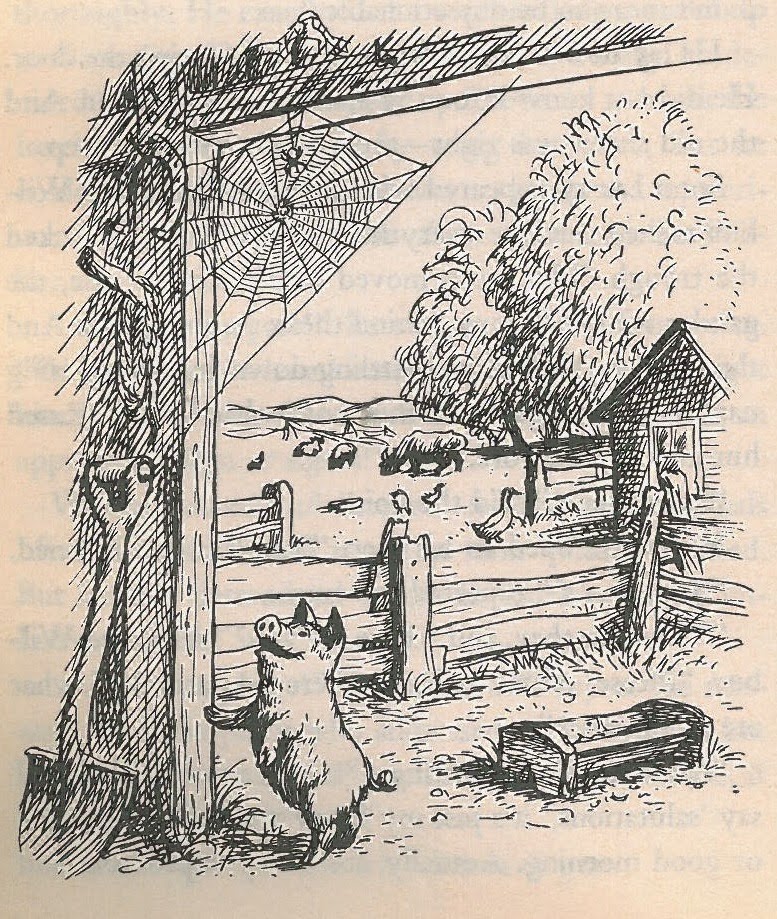 (White, E. B. Charlotte’s Web. New York: Harper Trophy, 1980. 36. Print.)
The BBC recently released a list of the top eleven books for children under ten. The list has some surprises. First, none of the books on the list have been published in the last forty years, which means, of course, no Harry Potter, no teenage vampires, no books about girls living in a postapocalyptic future.
Second, this list is specific in scope. It’s not a list of the best kid’s books, or the best young adult books; it’s a list of the best books for a particular age-group—kids ten and under. Its narrow range necessarily puts some restrictions on the list itself.
Here’s the list in ascending order:
11. Laura Ingalls Wilder, Little House on the Prairie,
10. Madeline L’Engle, A Wrinkle in Time,
9. Ursula Le Guin, A Wizard of Earthsea,
8. Roald Dahl, Charlie and the Chocolate Factory,
7. A. A. Milne, Winnie-the-Pooh,
6. Antoine de Saint-Exupery, The Little Prince,
5. Louisa May Alcott, Little Women,
4. Lewis Carol, Alice’s Adventures in Wonderland,
3. Maurice Sendak, Where the Wild Things Are,
2. C. S. Lewis, The Lion, the Witch and the Wardrobe,
and
1.      E. B. White, Charlotte’s Web.
I wasn’t surprised to see Charlotte’s Web on the list—maybe not number 1. It’s at least a book that kids still read. More than one of the books on the list are books that kids only read with the guidance of an adult or with an adult. Several people to whom I showed this list suggested it looks like a list of books parents would want their kids to read.
I tell my children’s literature students every year that the books we study at the university are often books kids don’t read anymore. Alice’s Adventures in Wonderland, number 3 on the BBC’s list, is one such book. Alice is a character who has entered popular culture in odd ways—an odd book by an odd man. This year is the one hundred and fiftieth anniversary of the publication of Louis Carroll’s book. I don’t teach it often, and I don’t think it’s a book widely read by kids anymore.
Some children’s books, such as Alice, are approaching the status of a cultural artifact, more than being a book you will find on the average ten-year-old’s bookshelf.  Winnie-the-Pooh is another unfortunate example of such a trend. Many adults will tell you they’ve read Pooh to their kids, which they, of course, should. But the character of Pooh has been Disnified and comodified so completely that many kids wouldn’t even know that this loveable, silly bear has a book about him.
Le Guin’s A Wizard of Earthsea is another surprise on the BBC’s list. Don’t get me wrong. I love this book, and I’m rereading it at the moment. It’s just not a book that gets talked about much anymore. If you mention a school for wizards, any class of students—elementary, middle school, or university—is likely to think of Hogwarts rather than Roke Island.
And what about Lewis? Again, I love the Narnia books, but they are Christian in scope and theme. Nothing against Lewis or Christianity, but naming a Christian text as one of the best books for kids ten and under is likely to alienate a significant portion of the population. As for A Wrinkle in Time—another book I love—I would have to call it Christian-time-science-fantasy.  This book was published a year before Lewis died, but I would have loved to have heard him talk about it. I recently encountered a graphic novel version of A Wrinkle in Time, but I don’t think kids read it the way they read the Narnia books. As for Little House on the Prairie and Little Women, again, kids read them, which makes them more likely candidates for such a list. My youngest loved the Little House books, and I’ve met many kids who love them as well. Finally, as for Where the Wild Things are, I could see until I was ten years old, and I remember this book in the school library. I agree it’s a book deserving of being on the list, but those monsters freaked me out every time I looked at them.
Now for the books I thought should have been on this list. I have just two: L. M. Montgomery’s Anne of Green Gables and J. R. R. Tolkien’s The Hobbit. These are books that should be on the list, not just because I love them, but because they are books that challenge, engage, and go straight to the heart of what it means to read for the joy of it. And let’s not forget, girls read Anne. As for The Hobbit, the book gets criticized for the authorial asides that some critics suggest condescend to the child reader. Even Tolkien himself disliked these asides and took many of them out in the second edition. I never minded them; they made it a safer book to read—for me, anyway. The world of The Hobbit was such a revelation to me at age eleven that those narrative asides helped me remember that I was, in fact, in an imaginary world.
One final thing about this list. In a time of diversity, among both books and readers, this list is decidedly white. The list includes no characters of colour, save those from Le Guin’s Earthsea—Ged is copper-brown in colour, while his friend Vetch is black-skinned. However, this is less a cultural comment than it is an attempt to undercut the story of the traditional, white, European hero. What do you do with a list of books for kids that simply has nothing by way of cultural diversity, features domesticated girls, and fails to include anything about nontraditional families or differently abled kids? I’m sure these books would appear on my list, but let’s not pretend that these eleven books constitute only a fraction of what most adults want kids to know about literature and the world.