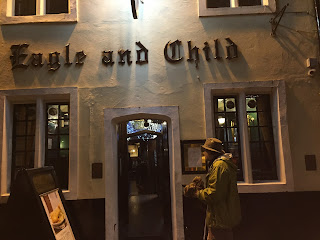 Reading about Lewis, Tolkien, and the other Inklings is something I’ve done for many years. I finally had the chance to visit Oxford this last August with my daughter, taking the time to visit Magdalen College where Lewis taught and lived, and to think about these men living their lives in Oxford more than half a century ago.
My daughter and I arrived in Oxford late on a rainy Monday. We had to leave our car in a car-park and take a bus into the city. Because it was late—nearly midnight—and we were tired and hungry, the whole thing seemed surreal to me. We got directions from our helpful bus driver, and set out to find the porter’s door where we could pick up our keys. We had reserved two rooms in the residence at Magdalen College.
Did I say it was rainy and dark?—that we were tired and hungry? We hauled our suitcases along the imposing wall of the college, past occasionally by groups of drunken students—something I later learned has been a feature of the city for more than five hundred years.
We were lost. We were definitely at the college, but where was the door? We crossed the High Street, and my daughter spotted a darkened door in the forbidding stone wall of the college. It was unmarked, but there seemed no other entrance. WE went to it and rang the bell. A wizened little man let us in, and we told him we had booked rooms at the college. He shuffled around until he found our names, then handed over two sets of keys.
I’m in a Dickens novel, my tired brain said. I knew I was in a Dickens novel; if I were in a Harry Potter novel, things would seem even weirder.
We finally got into our rooms, and in a moment of weakness I wished desperately I was at home, and not in this strange place.
Sleep, coffee, and a full English breakfast the next morning made Oxford look much friendlier. It was still raining, but a rainy morning with the street full of people was much different from what we had met with the night before. The place we found to eat was The Rose—a snug little café down High Street from Magdalen. We went back to that café several times over the next few days.
We spent the first day wandering about Oxford. We had a bus tour of the town, which was helpful and informative. We spent time in the Ashmolean Museum, which was a nice way to escape the busy streets and the rain. We walked until we found The Eagle and Child, the pub where the Inklings met, often on Tuesday mornings, and called by them The Bird and Baby. We went back to the pub that night for dinner, and as we ate, I tried to imagine Lewis, Tolkien, and the other Inklings sitting here, drinking and smoking and having spirited conversations.
As we walked back to our rooms, evening was settling fast. It had stopped raining, and the streets and pubs were filling with people. As we walked, I had to reconcile my sense of the past with this busy, vibrant present. Oxford has been a centre of learning in England and Europe since the eleventh century. Its history is long, and Lewis, Tolkien, and the other Inklings are only a small part of that history, but I was intent on discovering something of them while I was here. 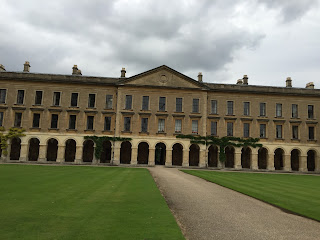