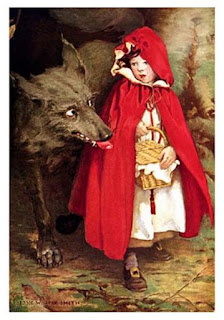 Red Riding Hood is one of those characters that most people recognize. But many don’t realize how many versions of this story exist, and they think of it as a story that’s mostly for kids. It isn’t—not really.
The version with which most people are familiar is the Grimms’ “Little Red Cap.” It’s the version my students know, and the one that has Little Red eaten by the wolf and saved by the woodsman. Interestingly, “Little Red Cap” is actually two stories in one: the first in which Red is eaten by the wolf, and the second in which she and her granny trick the wolf into climbing down the chimney into a pot of boiling water. On the other hand, my students are always surprised when reading Charles Perrault’s version of the story, in which Red takes off her clothes and climbs into bed with the wolf. Granted, Perrault has something specific in mind with his story, but the scene comes no less as a shock.
The story gets adapted and retold endlessly in popular culture. From Disney’s 1943 short, Red Hot riding Hood, to the live action version from Fairy Tale Theatre, hosted by Shelley Duvall, to the Chanel No. 5commercial with Estella Warren, and Red’s appearance in Disney’s Into the Woods from 2015. And this says nothing about the many variants of the story in print, and the 2011 horror film by the same name. You can find my version of the story here.
What, then, is the fascination with this story? Bruno Bettelheim claims Red Riding Hood is a story about sexual readiness, while other scholars claim it’s a story about rape. Whatever the reason, the story speaks to primal fears and primal appetites—a far cry from that glass-slippered heroine who has as much a place within popular culture as her dark twin.
So you don’t have to go looking for it, I’m including here the moral from Perrault’s version of the tale. And yes, he includes a moral, just so we are sure to understand Little Red’s fate.
“Moral
Children, especially pretty, nicely brought-up young ladies, ought never to talk to strangers; if they are foolish enough to do so, they should not be surprised if some greedy wolf consumes them, elegant red riding hoods and all. Now, there are real wolves, with hairy pelts and enormous teeth; but also wolves who seem perfectly charming, sweet-natured and obliging, who pursue young girls in the street and pay them the most flattering attentions. Unfortunately, these smooth-tongued, smooth-pelted wolves are the most dangerous beasts of all.”