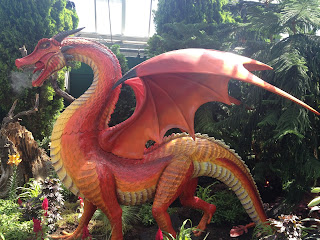 The thing on the ground was making such a fuss that it took a moment before Nell could understand what she saw. “Come on,” said Nell. “Bring him out into the light.”
The wolf picked up the unfortunate squeaker like a sack. He trotted forward to where the road ran out from the shadow of the fortress, and dropped his burden in a heap.
Nell peered down. Lying before the feet of the wolf was a dishevelled young man—hardly more than a boy. “Now stop your noise,” said Nell, sternly. “Who are you, and what has happened here?”
The boy gave a sniff, and he looked up at Nell. “It’s the dragon, Miss. It comes a marauding every night. T’is said no man can stand against it. It burns and destroys where ever it goes. It eats the people’s cattle and sheep, and it carries off the young folk to its layer. I always thought dragons was particular about maidens, but this one don’t care. Carries off all the young folk it can find. It almost got me the other night.”
Nell thought it was time to interrupt the boy’s story. “What is your name?” she asked kindly.
“It’s Norman, Miss. I’m the smith’s boy,” said Norman, with a sniff. He looked a scance at the wolf. “Is he going to eat me, then?”
Nell laughed. “No,” she said. “This wolf is my friend. He won’t hurt you.”
“Now, what about the prince?” asked Nell, more brusquely? “Is he not doing anything about this monster?”
Norman looked at her out of round eyes. “The prince?” he said, his voice rising again to a squeak. “The prince is mad—or perhaps just terrified, Miss. They say he has closed the palace up to any and all of his people. He is afraid the dragon will come and take his Royal Highness, so he has locked himself away. He won’t let anyone near—not even his Royal Mother.”
Nell looked thoughtful. She glanced at the wolf. “Perhaps we should pay a visit to the prince,” she said.
“He won’t let you near,” warned Norman. “He’s mad, like I say.”
“Be that as it may,” said Nell. “We are going to go and ask him what he intends to do about this dragon. Having a dragon rampaging over the land simply won’t do.”
Norman sprang to his feet. “Then I will come with you, Miss!” he cried. He held up two weedy arms. “I may be just a smith’s boy, but I’m strong, Miss. If you intend to do something about this terrible dragon, then I want to help.”
Nell looked at him sceptically, and then at the wolf. The wolf looked back impassively.
“I can at least show you the way,” said Norman, hopefully.
Nell didn’t bother pointing out that the road would probably lead right to the palace. “Very well,” she said. “You may join us.”
“I am at your service,” said Norman, bowing low.
“You need not be at my service,” said Nell. “But you are free to accompany my companion and me for as long as you like.”
And with that, the three of them turned and began walking down the road, Norman chattering away about the kingdom, the dragon, and a very special milk-maid he had a fancy for back home.
The way was long, and not until nearly sunset did the companions arrive at the palace. But arrive they did, and it was a sight to behold.
The dragon’s marauding feet had crushed and trampled the grass and gardens all around the palace, but, oddly enough, nothing seemed burned or destroyed. The famous floating gardens were hidden by a mist over the lake, and the palace itself was shrouded by a roiling fog. The light was fading, and the air was damp. Nell shuddered in her heavy travelling cloak. The wolf’s eyes seemed to glow in the strange light, and Norman’s teeth rattled in his head.
“H-h-here w-w-w-we are,” stuttered Norman, from cold or fear Nell wasn’t sure.
Nell peered through the fog to where she could just see the outline of a broad set of marble steps leading up to the palace doors.
“Any suggestions?” asked Nell.
“I suggest you knock,” said the wolf. “This place seems under an enchantment, but I see no harm in trying.”
Nell nodded, and she walked across to the broad steps, peering up at the great palace doors. They looked uninviting. But with a quick breath of resolve, Nell mounted the steps, and spotting a knocker in the shape of a dragon’s head, she knocked three times, the sound booming and echoing weirdly in the foggy air.